Down by 16 and it wasn’t even halftime. I’m not the kind of fan who will turn a game off, I’m not the guy who packs up and exits the arena early, but I’ll admit I didn’t see much hope in a Jayhawk comeback.

And why should we have believed? This year’s Kansas team feels different; and not in a good way. Two losses at home before February. Another at the Sprint Center. Not much depth. Not very tough. Question marks on Newman. Question marks on Vick. The list goes on and on.

If the last four teams, two who made the Elite Eight, one who had Embiid and Wiggins, if they couldn’t get the job done in Morgantown, what case does this team have to break the streak?

The only streak this team seemed poised to break was the 13 consecutive Big 12 titles.

Well, we all know what happened next. And man it was awesome! I’m still on a high from that win earlier in the week.

What I wanted to do was find out how it happened. What did we do right in that second half? Most importantly, how can this be repeated?

So I fired up the game film, made some notes, took some screenshots*, let’s check it out.

*Screenshots – The game was broadcast on ESPN, all rights reserved to ESPN for the telecast. If the screenshots in this post are any sort of violation please email me at chris@mediumraresizzle.com and I’ll take them down or I’d be happy to run a free ad for ESPN on this blog post. Whatever works best.

Against West Virginia you’re not down by points, you’re down by minutes

Things didn’t get off to a fast start in the second half. We had five points in five minutes. A whopping 33 total with 15 minutes left in the game.

Math was never my strong suit but stick with me here. I’m dusting off some high school algebra:

Let’s go ahead and round that up to 20. This means KU was on track to score 53. At that pace, we would need to hold West Virginia to three or four more baskets!

Bob Huggins’ West Virginia teams are traditionally pretty bizarre to watch and I’m guessing the first weekend of March Madness I’ll see a score that’s like 42-38 against a No. 14 seed with five minutes to go. I’ll flip over thinking upset, completely forgetting that four points against West Virginia is like being down 15 points to a team without their elite level of defense.

So then what’s it like when you’re down 15 points to West Virginia? Actually, it was almost 17, West caught the ball under the basket, had a clear layup, but fumbled the ball out of bounds.

Doke only played five minutes in the first half. That was one positive out of halftime, we’d get him back to give us some more scoring, defend Konate, and hopefully draw their dominant shot blocker into foul trouble.

Udoka picked up his third foul pretty quick and at the 13:22 mark was whistled for #4.

Quietly Svi taking over in the second half

First 5-7 minutes, not a whole lot of positives for Kansas.

Except for Svi. Under the radar he was starting to take over the game; even though his shots weren’t yet falling in.

First play, great shot fake, sidestep, just missed the three. Next possession, drives to the basket, gets blocked. Then an assist to Graham. Another possession where he makes a great move, but again, missed three.

Then came my favorite play of the game. Svi has the ball at midcourt, fastbreak layup ahead. But waiting for him at the rim was Konate and we saw five times in the first half how that story ends. Nevertheless, Svi charged ahead, goes right at the basket.

At first, I’m thinking, “Oh crap, here comes another brutal block, don’t do it Svi, save yourself!” Then I immediately contradicted myself when I saw him float it up and I’m like, “C’mon Svi! Show some toughness!”

Konate goes up for the block and I realize what’s happening. Just as important as De Sousa’s moment was in the first half when he went mano-a-mano at Konate, showing he wouldn’t back down, so was this moment by Svi. Instead of brute force, this was the fine-tuned paintbrush, the chess move, where Svi baits him into a block all while setting up Udoka for the alley-oop dunk.

But again, this wasn’t really a turning point. Look at that score: 45-31. This is that 33rd point I was talking about earlier. Udoka still picks up his 4th foul and fast forward to the 8:52 mark, Self puts Doke back in because we’re still down double figures, 55-43.

If I’m going to point out the good stuff Svi was doing, have to be fair and also point out a two-possession stretch that had me in that about-to-throw-the-remote territory.

But even here, it was this up-and-down roller coaster ride of bad things happening next to good things next to bad things. Here’s what I mean:

The first one, Svi gets a steal (good!), looks to outlet pass, but sees no one’s open so he tosses the ball up, catches it himself, travels (bad).

Graham comes over, hits Svi on the chest, shows some vocal leadership. Let’s go! (good again). An under the radar part of this team, Graham and Svi are best friends. They were last year too. They trust each other on and off the court and here in this moment we saw Graham’s not shy from pushing his buddy in the heat of battle (very good).

Plus this was only KU’s first turnover of the second half, a remarkable feat against Press Virginia. I feel like West Virginia logs a couple turnovers even when the other team is still on the bus.

What sucked about this turnover is it felt like a fast break was thrown away, and every relatively easy basket matters in this type of slugfest.

Next defensive possession, Svi does a great job boxing out. It’s so important for this four-guard lineup that Svi and/or Vick can get in the paint and help Udoka. Svi goes up, grabs a big rebound over two other guys.

But don’t celebrate too fast. Svi gets away with a travel then dribbles the ball off himself out of bounds.

Right when you’re ready to sell those shares of Svi stock, he catches fire. Hits a three on the baseline. 57-51.

Shots are falling. Carter has 4 fouls. Konate has four fouls. Wait, are we secretly in this game?

Graham forces a turnover on Carter. Then he has this classic Devonte moment. See, Frank Mason was laser-focused on the game, it was a lot to see him even crack a smile on the court. Graham is more of a performer. He interacts with the crowd.

Right after the forced turnover on Carter, Graham high fives this guy in the front row. The dude’s sitting courtside, wearing a white shirt, and looked upset at the call by the ref. All signs pointed to him being a West Virginia fan, but it looked like Graham won him over. I’m thinking this guy was a Jayhawks fan by the end of the game.

Graham seemed to be getting more energy as the game went on; crazy considering he wasn’t taken out all night. After the forced turnover he hit the biggest three of the night tying the game 59-59. 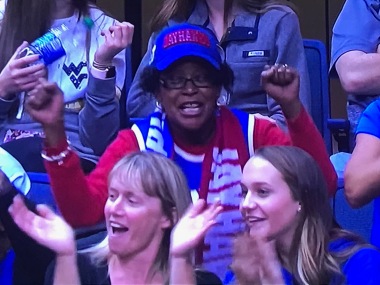 And then got to pause for this guy. If there is ever a “West Virginia stole KU play calls” scandal in the future, is there anyone who would immediately skyrocket faster to suspect #1 than this guy? 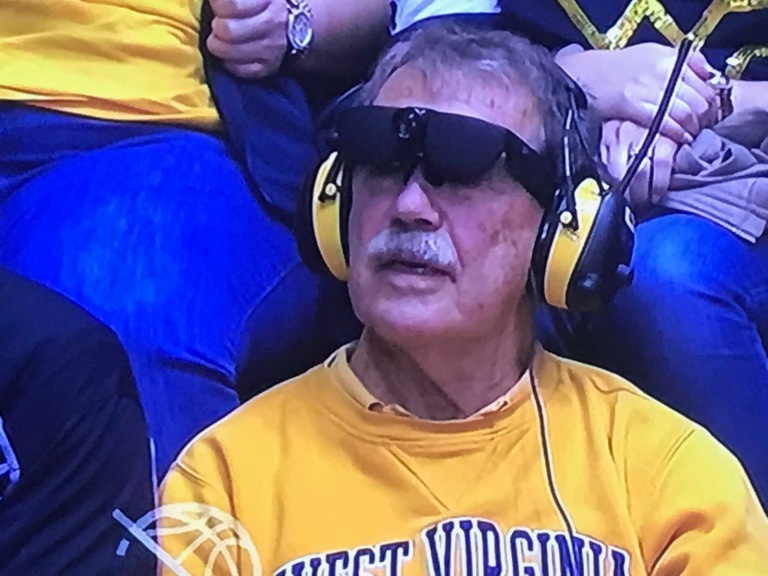 A West Virginia fan excuse that I would totally accept as being fair – Something worth pointing out, the score was actually 60-59 not 59-59. They adjusted it later at the TV timeout when they could go back and review a West Virginia three that was initially counted as a two. I think this had an effect on the game. Once a team ties you it feels like you’ve officially lost the momentum. Holding onto that one point lead is a little psychological edge.

Any Mountaineers fan who wants to use this in an argument, I think there’s a reasonable case.

There was so much to like with how Kansas closed out the final four minutes of this game. Those last few minutes of a close game has always been Bill Self’s wheelhouse.

Here were four moments that stood out to me.

The Chess Move Part 2 – Vick goes for the same Svi style alley-oop but throws the ball so high to Udoka that even LeBron would be like, “Dude, I can’t reach that.” But this still drew the foul and got Udoka to the line.

Because this alley-oop play happened twice in the second half, it means the coaching staff brought it up at halftime as a strategy adjustment. Always love seeing a team respond to a coaching adjustment. In March, there are no Best of Seven series. Have to be able to implement the halftime whiteboard.

Lightfoot went up for the dunk, resulted in a goaltend where the West Virginia defender poked his hand through the rim.

It led to a great “Oh no!” moment, this quick screenshot of horror where it looks like Lightfoot is thinking, “No, no, no, no, please tell me I didn’t just miss that dunk?!”

That was a crucial basket, even if the ball didn’t go through the rim.

As I’ve been writing this post, I got the notification that the “Billy Preston era” in Kansas is officially over. He’s signing with a Bosnian team. I’ll have more thoughts on this in a post next week, but here’s the formula for how KU can make their thin frontcourt work, even without Preston:

So how’d it look against West Virginia?

Behind on scoring, but that was more on Udoka than the Lightfoot/De Sousa combo. If those two can continue to improve it saves us from Udoka foul trouble, allows Doke to be better rested at the end of a game, and also opens up the opportunity for some traditional two-big sets (something rumor has it Bill Self has been testing out in practice).

Toughness? Wanting the win? Willing to sacrifice your body?

This play had it all. Perhaps the end of this team being “soft.” 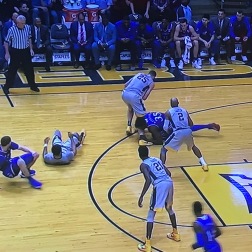 Another moment of Graham being the leader out there, Udoka fouls out, Graham goes over and walks to the bench with the big guy. Kind of this, “We got it from here Doke, you did your job tonight, head up.” 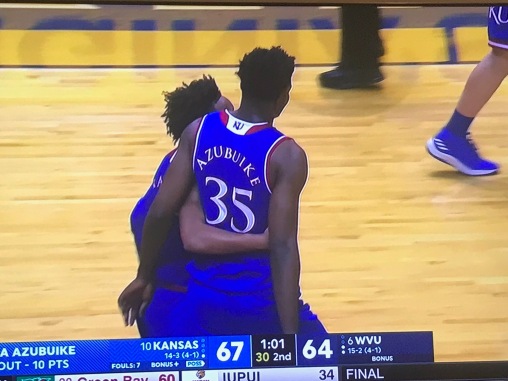 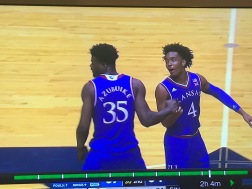 Pair all of that with strong free throw shooting down the stretch (another area where Svi shined, he hit four-of-four) + Svi forced Carter into two bad threes, and we got a repeatable formula.

This wasn’t KU getting “lucky” by hitting a bunch of threes. This wasn’t an overrated opponent. West Virginia is the real deal, they have Final Four potential. No, Kansas did the little things right in the second half. Low turnovers. Attention to detail on defense. Drawing fouls on the Konate and Carter.

It’s a look we haven’t seen yet from this team and a major resume boost. It has Jayhawks nation looking like this: 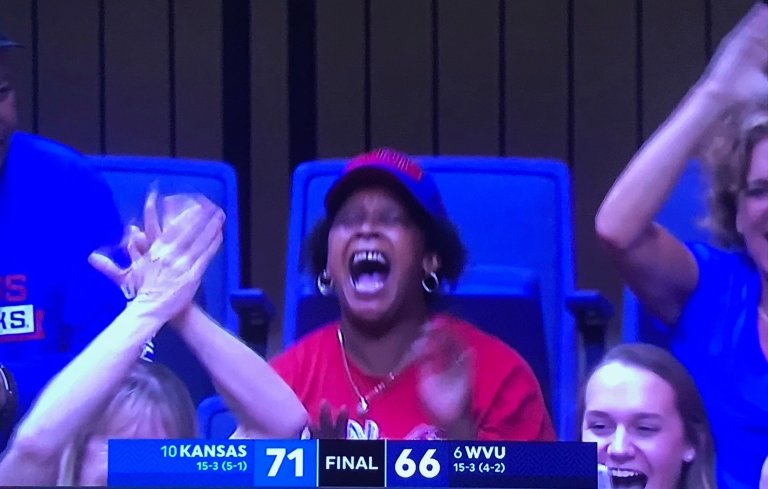