Kansas doesn’t have to win at West Virginia. We’ve lost there four years in a row and that hasn’t stopped us from winning four Big 12 titles, entering the NCAA Tournament no lower than a No. 2 seed, and reaching back-to-back Elite Eights.

A trip to Morgantown you just hope to make respectable.

That’s what made the end of the Kansas State game so scary. We were staring down an unprecedented third loss in Allen Fieldhouse. And I hate when they count Sprint Center as a home game and bundle that all together with the Phog, but if you do add that in, it was about to be “home” loss number four.

Could you imagine dropping to 3-2 in conference play? Especially with West Virginia on Monday, the Jayhawks were dangerously close to a 13-5, 3-3 conference mark.

After the game, I had the thought, “Maybe this team is just better on the road than they are at home?”

If you look at the home resume (and again, I hate to do this but I am going to include the Sprint Center) the Jayhawks are 8-3. Once you filter out* the Tennessee State, Oakland, Texas Southern, Toledo, South Dakota State, and Nebraska Omaha mid-major games, it looks really bleak. The Jayhawks are just 2-3 against major conference foes. And in those five games, we’ve been outscored 404 – 379. In other words, we’d be losing 80.8 – 75.8.

Then if you really want to pile things on, you could throw the Sprint Center losses against Oregon and TCU from end of last year to the list, now KU’s just 9-5 in their last 14.

*Filter Out – Worth mentioning, Toledo, Oakland, and especially South Dakota State are not bad teams. Toledo and Oakland both have decent shots at winning their conference tournament and South Dakota State could end up as that No. 12 over a No. 5 team in the Tournament. The fact that we won those three by an average margin of 38.3 ppg is a major reason why the computers kept us in the Top 5-10 even after those losses against Washington and Arizona State.

But on the road or at neutral sites, this team is quietly undefeated. 7-0. I’m going to use the current KenPom rankings here to show how, even before West Virginia, we had built a solid resume. We’ve got the wins over Kentucky (26), TCU (27), Texas (40), Syracuse (46). Nebraska (a true road win) and Stanford (neutral) are not likely tournament teams, but their KenPom is basically between South Dakota State and Toledo.

What better way to test this theory than against West Virginia?

Then the Jayhawks got punched in the mouth. The very first try against their press, we couldn’t even get the ball in bounds. Five-second call. Then there was Konate brutally swatting shots, making our guys look like the kid at summer camp who gets called up to play 1-on-1 against the NBA player. Jay Bilas joked about a shutout when it was 5-0 West Virginia, I thought that comment hit too close to home. Forget how do we win this game, I didn’t know how we were going to even score a point.

But even though the halftime score was 41-28, I was strangely optimistic. Even stranger, I took confidence in Konate’s five blocks (+1 Patrick Ewing “this is my house” goaltend).

Konate’s performance was reminiscent of Mo Bamba, but with more flair. Konate was doing the Dikembe Mutombo finger wave. He was moving his arms up and down getting the crowd into it. When Garrett went in full-speed, tried to put Konate on a poster, Konate stuffed him at the rim and then had this Russell Crowe in Gladiator moment. 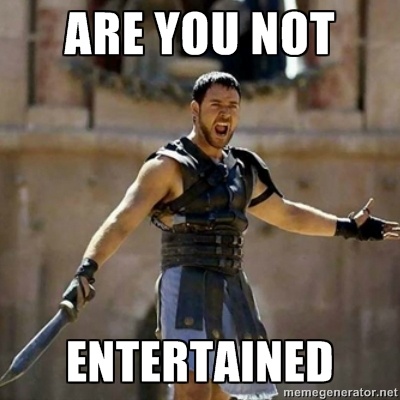 How did I take any sort of confidence in that?

First, Kansas was attacking the basket. Not just standing around shooting threes. Against a team without Bamba or Konate, those are five baskets or maybe trips to the free throw line.

And three of those blocks were on attempted dunks. Svi didn’t shy away, neither did Lightfoot, and that Garrett dunk would have been absolutely vicious, Wayne Selden/Tarik Black style had it worked out. It takes a lot of guts to not go with a floater or adjust your shot in preparation for being swatted.

These are especially gutsy moves to do on the road, in a hostile environment. And it was our young guys doing it! We had Lightfoot, a sophomore, going right back up with a shot after being blocked. Garrett, a freshman, going full speed ahead even after witnessing four blocks.

It all built up to this moment when freshman Silvio De Sousa checked in–and freshman is a stretch, he’s really like a second-semester high school senior. Talk about trial by fire. Here, go in and check Konate.

Maybe De Sousa is too young to be afraid. He goes right up against Konate, wrestles away an offensive rebound, kicks it out. The guards were passing the ball around the arc when De Sousa goes to seal Konate in the post. I rewatched this play and Konate’s body language is almost like, “Alright kid, come on, this is a grown man’s game down here.” De Sousa seals him, gets the ball, throws a great post-move and makes the bunny over Konate.

That basket cut it to 10 points and when you have your youngest guy showing no fear, that fuels your veterans. Devonte Graham got stronger as the game went on. Svi picked up his game. Vick too.

Over a decade ago, I’m not sure which team it was but my dad referenced an “8-0 run against Tulsa” that turned the season around. I think these types of things can happen, it’s like when someone has a great speech or sings the national anthem in front of a big crowd, there’s this confidence boost after, “Wait, I can do this?” and every performance after is at a higher level.

I’ve decided just now that the comeback deserves an entire post of its own. So look for a more detailed breakdown on Thursday. I’ll dissect what we did right in the second half and how this went from being an ugly performance to our best of the year.